You are here: Financial Articles > Real Estate and Mortgage > Choosing Between a Fixed-Rate or Variable-Rate Mortgage Loan

Choosing Between a Fixed-Rate or Variable-Rate Mortgage Loan

What is the best option between the fixed-rate mortgage and the variable-rate mortgage? The answer cannot rely on hard science, because no one can predict with certainty if the interest rates will increase or decrease. Your decision depends on your risk approach and your budget flexibility. Let see what differentiates each rate.

A fixed-rate mortgage implies that the interest rate will stay the same during the mortgage term. Your interest rate and your monthly payments will be locked for a long or short term spreading from 6 month to 25 years. This type of rate is suitable for a risk averse individual with a safe approach on the mortgage, and based on a fixed budget and on a specific period. If you prefer to keep the same monthly payments and the same interest rate to avoid any changes in your budget, the best choice would be to go for a fixed-rate.

The variable-rate fluctuates along with the base rate offered by the national central bank, which is the key interest rate given by the Bank of Canada, the Federal funds of the United States of America, the London Interbank Offered Rate (Libor), the Euro Interbank Offered Rate (Euribor), etc. The base rate reflects the market conditions, and your variable mortgage rate combines this key interest rate with a margin added on it. For example, a variable-rate might be the base rate + 1%, and you renew the term annually.

A home owner who chooses a variable-rate is hoping the base rate will decrease in order to take advantage of a lower rate, unlike people with a fixed-rate who will keep the same, predictable one. But this goes both ways since the mortgage rate can also increase if the central bank decides to raise the base rate. This type of mortgage is made for people with a flexible budget, not scared of taking risks.

Variations of the Variable-rate Mortgage

There is another option to pay extra in order to cap the variable-rate. That way, borrowers pay for protection against a rate increase that they wouldn't be able to afford; the interest rate can always increase, but will never surpass the established limit. It is an option from the variable-rate that could satisfy a borrower normally attracted to a fixed-rate.

Variable-rate vs Fixed-rate Throughout Time

No one can predict with complete certainty the future fluctuations of the market rates, even if many put a lot of effort and energy into it. For example, those who chose a variable-rate in the 1980s lost when the rate went up dramatically, and those who chose the fixed-rate right before the credit crises of 2007 weren't able to profit from rates at an all time low. Those are good examples of unpredictable fluctuations of the base rate.

However we can observe one general rule. Historically, borrowers who chose a variable-rate won most of the time. The research of Dr. Moshe Milevsky from York University demonstrates that between 1950 and 2007, it was better to go for a variable-rate approximately 90% of the time. However, during the credit crisis with a base rate at an all time low, it is hard to believe you would make a mistake by locking the mortgage rate with a fixed rate.

Which Mortgage Loan to Choose?

A borrower's profile and their budget will determine the type of rate they should adopt. It is not irreversible along the way, but if you plan to change the type of rate, you have to be prepared to pay a penalty. The same rules apply if you choose a closed loan as opposed to an open loan. We have to be careful not to hurry modifications after considerable rates fluctuations, because the penalty is often higher than what can be saved by changing rate. If you have to make a decision on which rate to start with, history has shown it is preferable to go for a variable-rate, if the budget allows it.

Choosing Between a Long-Term or a Short-Term Mortgage Loan

Choosing Between an Open or Closed Mortgage Loan 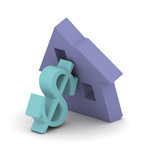 « Back to Real Estate and Mortgage Articles
Link to Our Site | Glossary | Privacy Statement | Disclaimer | Facebook | Youtube | RSS
Visit Credit Finance + to learn online how to improve your personal finances! Welcome to visitors from Canada.
Copyright 2008-2021 CreditFinancePlus.com - All rights reserved