You are here: Financial Articles > Loans > How to Evaluate a Business's Level of Indebtedness?

How to Evaluate a Business's Level of Indebtedness?

The current ratio is mainly used by financial institutions lending money for a short-term period. It is calculated by dividing the short-term assets with the short-term liabilities. The objective is to isolate the current accounts and verify if the company is able to cover their financial obligations of the current year using exclusively assets that can quickly turn into cash (bank account, receivables, short-term investments...)

A minimum ratio would be 1, which means that the company hold exactly the amount of liquidity needed to cover the debt that will be issuing in less than a year. In a case where the current ratio is under 1, the business would necessarily show some financial difficulties and wouldn't be able to easily pay their short-term debt. Indeed, it is never a good sign to be forced to sell capital assets in order to pay a line of credit, suppliers or other short-term debt. On the other hand, a current ratio too high could also represent a weakness in the way a company is managed, because the money sleeping inefficiently in an account could be used as an investment somewhere else in the company.

The acceptable current ratio differs from industry. Some industries are satisfied with a current ratio of 1 and other requires a ratio of 2. In general, the banks lenders are the one setting the acceptable level by establishing a minimum ratio as a condition for lending.

It is calculated by dividing the long-term debt of the business with the long-term debt and equity combined. The higher the percentage, the more the company is at risk. Plus, when a business has a big long-term debt, it has to pay higher interests, which affects considerably the cash flow and increases the likelihood of deficit. Long-term debt although is considered as the most interesting debt because it can launch the company if the money is well managed, so a ratio too low might signified a lack of effort in seeking new opportunities to grow.

The financial leverage ratio is obtained by dividing the total amount of debt with the company's equity. It indicates the proportion of debt a company was able to get with the shareholders' money. For example, if the leverage ratio is 2, the company was able to obtain in debt double of what they have as equity. In that way, the more a business has money invested by the shareholders and / or the profits of the company, the more it is able to borrow at the bank, which explains the use of the term “leverage”.

In case the total debt ratio or the financial leverage ratio is too high, the company has an obvious risk of not being able to pay their debt and later face insolvability. However, a ratio too low is not automatically a sign of low risk and good management. Companies underusing money from banks and other external creditors might not be as competitive and well positioned in the market as other companies that inject more in the business. Plus, the shareholders would certainly not agree in supporting most of the risk. You have to seek the right level of indebtedness.

The financial leverage ratio and the total debt ratio differ between industries. The minimal ratio required by financial institutions differs as well with the guarantees obtained and the level of trust existing between the loaner and the borrower. 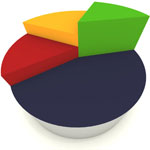